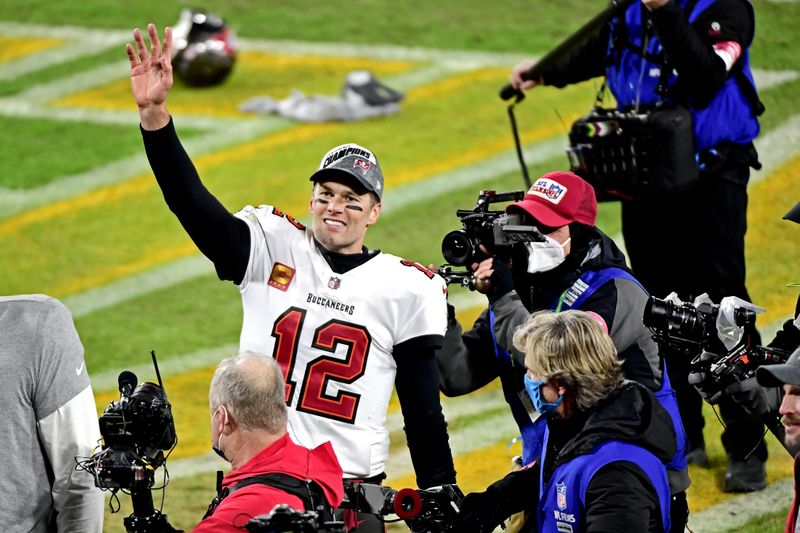 (Reuters) – The Tampa Bay Buccaneers will have something going for them no other team has had in 54 previous Super Bowls, home field advantage when they take on defending champion Kansas City Chiefs in the NFL championship game on Feb. 7.

Long before quarterback Tom Brady chose this season to leave the New England Patriots for the Buccaneers, Tampa Bay had been selected as host city for Super Bowl LV but the future Hall of Famer ensured he would own another line in the history books after leading his team to a 31-26 win over the Green Bay Packers on Sunday in the NFC title game.

The Buccaneers return to the Super Bowl for the first time since winning the Lombardi trophy in 2003 while Brady will be making his 10th appearance in the championship game seeking a seventh ring.

Kansas City earned their second straight trip to the Super Bowl with a dominating 38-24 win over the Buffalo Bills, quarterback Patrick Mahomes, showing no lingering affects from the concussion that knocked out of last week’s divisional playoff contest, tossing three touchdowns.

Home field, however, will not be quite the advantage it might have been for the Buccaneers with COVID-19 restrictions limiting attendance at the 65,000 capacity Raymond James stadium to 22,000.

Also, the Buccaneers have proven to be the ultimate road warriors this postseason, winning three away contests starting with a 31-23 wildcard victory over the Washington Football Team followed by a 30-20 win over the New Orleans Saints in the divisional round and Sunday’s decision over the Packers at Lambeau Field.

“To go on the road and win another road playoff game is just a great achievement and now a home Super Bowl for the first time in NFL history I think puts a lot of cool things in perspective,” said Brady. “Anytime you are the first time doing something it is usually a pretty good thing.”

In contrast, the Chiefs will head out on the road for the first time this postseason after a first round bye and then eliminating the Cleveland Browns 22-17 and the Bills at Arrowhead stadium.

The Super Bowl will also be a showdown of generational quarterbacks and most valuable players who have led their teams to the last two Super Bowl titles.