Europe is waking up from the pandemic with cafes in Paris, gelato vendors in Rome and beer gardens in Bavaria reopening, a major test for the region’s recovery in health and economic terms.

Authorities across the continent are loosening restrictions as infection rates fall and vaccinations rise. Italy, the original epicentre of the crisis in Europe, will phase out its national curfew in the coming weeks, and tough curbs are gradually easing across Germany. In France, restaurants can serve outdoor guests beginning on Wednesday, and museums, including the Louvre, plan to welcome visitors again.

As Parisian cafes — including Ernest Hemingway’s former hangout Les Deux Magots — prepare, the famed Moulin Rouge got in on the excitement this week, sending can-can dancers onto the streets to promote the cabaret’s planned reopening in September by displaying the date on the underside of their skirts.

Despite the exuberance, there’s still a pall hanging over the region, which has suffered relapses more than once in its effort to beat Covid-19. And with a new contagious variant that originated in India spreading rapidly elsewhere, measures to contain the disease will remain visible. In Berlin, testing will be required to dine outside at restaurants, which can reopen on Friday, and Parisian street life will be less bustling than before the pandemic.

“We are happy to reopen and are blessed to have a location that’s a marvel,” said Paolo Viglianisi, 66, owner of Paparazzi, a restaurant located in a quiet square just behind Paris’s opera house. “But things will never again be as they were.”

The restaurant had 39 employees before the crisis, and Viglianisi says he will start off with only about 15 staff on Wednesday. Eventually, he aims to get back to about 100 guests for lunch and another 100 for dinner — roughly two-thirds of his pre-crisis levels.

“The sunshine, the warm weather will help, but you have to reinvent yourself,” he said amid preparations for the reopening.

There’s a lot at stake. After a sluggish start to vaccination campaigns, Europe’s reopening is trailing the UK and the US, and the region can ill afford to fall further behind. The European Commission last week upgraded its 2021 growth outlook for the euro area to 4.3% after taking account of the bloc’s 800 billion-euro ($975 billion) joint recovery fund for the first time. But that pace would still fall short of the rebounds of at least 6% that economists expect to see in the US and the UK. 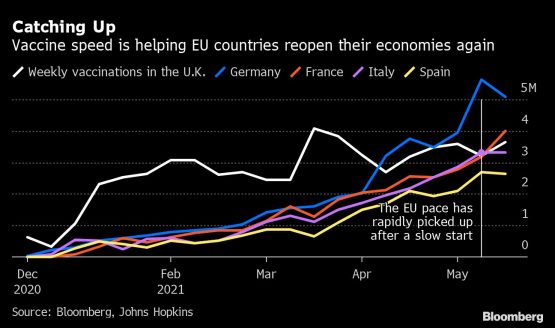 Politically, the continent’s leaders need to strike the right balance between reviving the economy and protecting public health. Chancellor Angela Merkel’s conservatives are fighting with Germany’s Greens to run Europe’s largest economy, while French President Emmanuel Macron, who tried in vain to avoid a third lockdown, faces a stiff re-election challenge next year.

The mood is one of cautious optimism. Lockdown measures have slowed the spread noticeably, and vaccinations are ramping up fast. But with the threat of new strains like the one from India, risks remain. Authorities seemed to have learned from last spring, when the disease was seen as under control only to return even more viciously in the fall.

“We can be confident but not rash,” Merkel’s spokesman Steffen Seibert said this week. With contagion rates still far higher than a year ago, “we haven’t yet reached a situation where we can enjoy as relaxed a summer as a year ago.”

The lingering concern means a tepid revival for establishments like the Chinesischer Turm beer garden in Munich, which opened last week after local contagion rates dropped below risk levels. Normally, some 7 000 guests can eat sausage and drink beer at the communal tables, but business has been restrained amid few foreign tourists and gloomy weather, while the threat of re-tightening restrictions remains.

“As long as we can remain open, we’re happy,” said Maria Pinzger, the beer garden’s spokeswoman. “But there are some risks like the Covid variants that we just can’t gauge right now.” In Spain, restaurants and theaters reopened about two weeks ago with capacity restrictions and early closing hours in most regions. In Barcelona, demand from the local population isn’t enough to replace the millions of tourists that used to crowd the city, says Sergi Ferrer, president of a shopkeepers association in the beach district of Barceloneta.

“If we have no tourists this summer, it will be ruin for us,” said Ferrer, who manages a restaurant on the city’s docks. “The restaurant fills up with locals during the day on Fridays, Saturdays and Sundays, but things aren’t yet good enough for us to open at night.” A waiter server customers outside a restaurant in front of the Colosseum in Rome. Photographer: Alessia Pierdomenico/Bloomberg

In Rome, extending the curfew past 10 p.m. will make a big difference for businesses like the Ripa 12 fish restaurant in the trendy Trastevere district. While it’s been open since late April, the outdoor tables are empty in the early evening, indicating the revival could be gradual.

“Our customers are professional people who work until late, hardly show up before 9 p.m.,” said owner Vincenzo Colao. With early curfews in place until this week, “many of them didn’t show up at all,” he said, adding that revenue has fallen about 70% compared to before the pandemic.

It’s similar in Paris, where tables outside the Paparazzi restaurant will be for a maximum of six people only, and space between them is required. The menu has also been pared back. Viglianisi expects many of the bankers and lawyers he once served will never come as often as in the past.

“Work from home isn’t going away,” he said. “People will come back to the office two or three days a week, then they will rush off to the countryside. I would do the same if I could.”