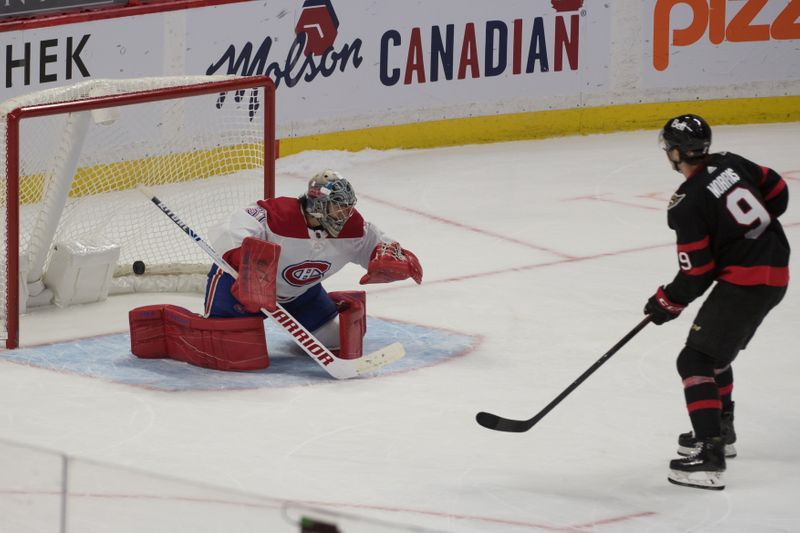 Josh Norris scored in the third round of a shootout to give the Ottawa Senators a 5-4 win over the visiting Montreal Canadiens on Tuesday.

The result wasn’t without controversy, as the Canadiens thought they had scored the winning goal with three seconds left in regulation. Brendan Gallagher redirected a Ben Chiarot point shot past goalie Matt Murray, but after a video review, officials waved off the play after ruling that Gallagher interfered with Murray prior to the shot.

It was Ottawa’s second win over Montreal in three days that required extra time, after Sunday’s 3-2 overtime victory. The Senators are 3-1-0 against the Canadiens this season.

Brady Tkachuk scored two goals and Drake Batherson had a goal and an assist for the Senators. Erik Brannstrom also scored, giving the defenseman his first career goal in 40 NHL games. Shea Weber scored twice for Montreal and Phillip Danault had two assists. Tyler Toffoli and Jonathan Drouin scored the Habs’ other goals.

Linus Ullmark had 41 saves and Sam Reinhart had a pair of assists as Buffalo downed New Jersey at Newark, N.J.

Victor Olofsson, Rasmus Asplund, Dylan Cozens and Cody Eakin each scored goals for the Sabres, who beat the Devils for the second time in four days.

Nikita Gusev scored a goal and Mackenzie Blackwood finished with 33 saves for New Jersey, which lost its third straight game.

Kasperi Kapanen scored at the end of a 2-on-1 breakaway 1:43 into overtime to give visiting Pittsburgh a victory over Washington.

The winning play was set up by Teddy Blueger racing up the right wing. Kapanen (one goal, one assist) came in on the left, took a quick Blueger pass and fired a shot that beat Washington goalie Vitek Vanecek (34 saves) just inside the left post.

Sidney Crosby played in career game No. 1,001 and was held off the scoresheet. Tristan Jarry finished with 20 stops in net for the Penguins.

Patrick Kane had a goal and three assists, as visiting Chicago won via a shootout in Columbus.

Carl Soderberg added a goal and two assists for the Blackhawks. Brandon Hagel, Dominik Kubalik and Adam Boqvist also scored for Chicago, which won it on Alex DeBrincat’s goal in the shootout.

Patrik Laine and Oliver Bjorkstrand had two goals apiece for the Blue Jackets. Columbus rallied from two goals down in the third to tie, but failed to find the net in overtime, or in the shootout.

Forsberg broke a scoreless tie with his ninth goal of the season 4:36 into the final period. Forsberg, who has three goals in the past four contests, then assisted on Tolvanen’s wrister from the far circle with 10:03 to play in the game.

Roman Josi assisted on both goals for Nashville, which has won two of three against Detroit this season. Jonathan Bernier made 31 saves for Detroit, which totaled 13 shots in the first two periods and was blanked for the third time this season.