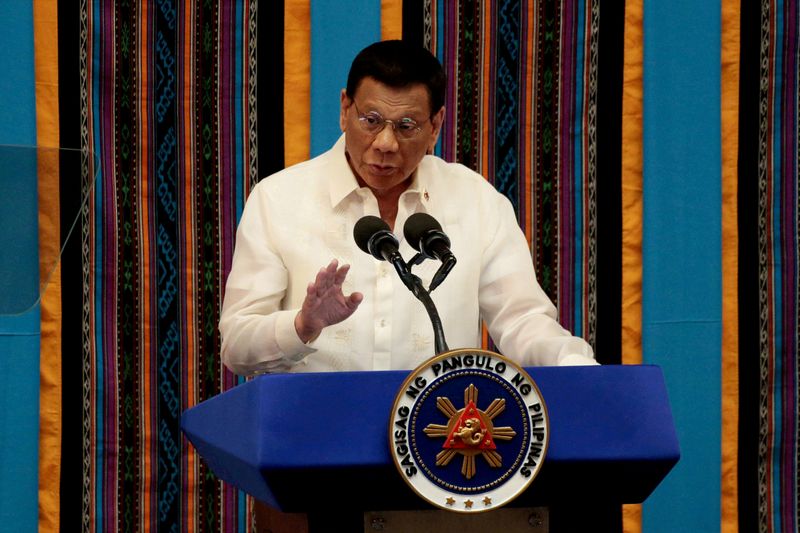 MANILA (Reuters) – The United States is providing the Philippines with military aid that amounts to “loose change” compared to other Asian countries, a top government spokesman said on Monday, supporting demands by President Rodrigo Duterte for Washington to pay more.

Duterte said last week the United States should pay more if it wants to maintain the two-decade old Visiting Forces Agreement (VFA), which he unilaterally cancelled last year in an angry response to an ally being denied a U.S. visa.

“If we have very strong ties with a very strong ally then I think it also comes with a higher amount of financial assistance to be given,” presidential spokesman Harry Roque told a regular briefing.

Roque cited a study by the Washington-based Stimson Center, which showed the Philippines received $3.9 billion in U.S. counter-terrorism support from 2002-2017 compared to the $16.4 billion for Pakistan over the same period.

“We got $3.9 billion. Is that a huge amount? That’s loose change compared to what other countries were getting,” he said.

The militaries of the two countries enjoy close ties, forged during decades of joint exercises that have boosted the capability of Philippine forces while giving the United States an important foothold in a region where China’s power and influence is growing.

Defence officials from both countries are trying to salvage the VFA, which underpins the Mutual Defense Treaty and an Enhanced Defense Cooperation Agreement. Duterte has threatened to scrap all of them.

The U.S. embassy in Manila did not immediately respond to a request for comment. In December, it said the Philippines received the most U.S. military assistance in the Indo-Pacific region, having received 33 billion pesos ($689 million) worth of hardware.

Roque said Duterte was upholding the national interest and not committing extortion, as some critics, including vice president Leni Robredo, have said. His demand was for compensation, because the rotating U.S. troop presence put the Philippines at risk.

Duterte schooled Robredo about foreign policy making, saying the power to determine and shape foreign relations rests with the president.

“It is not money I am asking for … we should be provided with arms and armaments that could place us at equal footing with countries at war with us,” Duterte said in a late night-televised address.

He told Robredo, who was elected separately to him and is expected to be the opposition’s presidential bet in next year’s elections: “You are not qualified to run for president. You do not know your role in government.”

Robredo’s spokesman did not immediately respond to a request for comment.