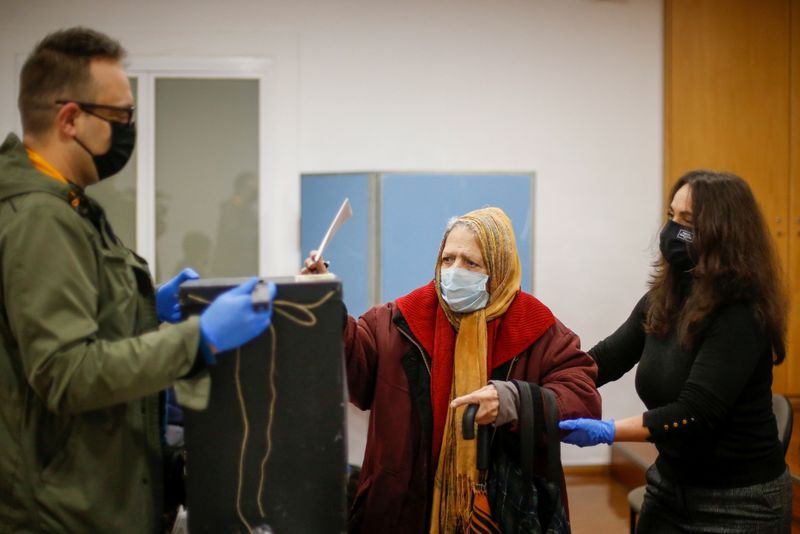 LISBON (Reuters) – Masked, socially distanced and each given their own pen to avoid spreading germs, Portugal headed to the polls on Sunday to vote for the largely ceremonial post of president even as coronavirus cases reach record levels.

Opinion polls show that the incumbent, President Marcelo Rebelo de Sousa of the centre-right Social Democratic Party, is likely to win with ease.

Voters queued up as polls opened in the Lisbon parish of Santo Antonio, guided by red stickers on the ground marking the two-metre gap.

“I’m here among the first to avoid groups and queues,” Cristina Queda, 58, said as she waited. “Since the date of the elections wasn’t changed, I decided to come early to avoid that situation.”

Just under two thirds of Portuguese thought the election should have been postponed because of the pandemic, according to a poll conducted last week by research institute ISC/ISCTE.

Pollsters predict record abstention of 60-70% in part because hundreds of thousands of voters are themselves in quarantine.

Santo Antonio parish head Vasco Morgado said councils had taken all precautions – in his parish’s case, including even ambulances at the door in case of emergency.

“This is as safe as is possible at this time,” Morgado said. “It’s a democratic act which many people have fought for over the years – the proof of which is that now, even in a pandemic, people are getting out to vote.”

The country of 10 million people is experiencing a severe post-Christmas pandemic surge, with the world’s highest seven-day rolling average of new cases and deaths per capita.

Authorities reported a record daily toll of 274 deaths and more than 15,300 new cases on Saturday, with ambulances queuing for several hours at hospitals full to capacity.

“I don’t agree that the date wasn’t changed,” Jose Antonio Queda, 72, who also came early with his wife, said. “If we’re in confinement, we should be avoiding the virus as much as possible.”