South African Finance Minister Tito Mboweni signaled a shift in policy to get the economy back on track when he presented a budget reminiscent of those in the early 2000s, when expansion in gross domestic product was as high as 5% a year.

Mboweni backtracked on planned tax increases, announced that the levy for companies will be reduced from April 2022 and stood firm on plans to rein in the state-wage bill.

The following charts show some of the key points in what the government calls “pro-growth fiscal consolidation.” The consolidated fiscal deficit is now seen at 14% of GDP this year and will narrow to 6.3% by 2023-24. While this is better than the projections in the October medium-term budget, it’s more than double what was predicted last February — before South Africa detected its first Covid-19 case — and will be the largest shortfall on record.

“We have always, as South Africa, published budgets that promise a decline in the budget deficit over the next three years and the speed at which it declines is never the speed promised,” said Christie Viljoen, an economist at PwC. “The intentions are there but narrowing the budget deficit in South Africa is very difficult, even in the best of economic times.” The anticipated peak for state debt was reduced to 88.9% of GDP in fiscal 2026, from the 95.3% announced in October’s medium-term budget. That’s partly due to spending cuts and better-than-previously projected revenue estimates over the next three fiscal years.

“Government’s chosen fiscal path is not easy, but it will support higher levels of economic growth and enable the country to avoid a debilitating debt spiral,” said Dondo Mogajane, the Treasury’s director-general. 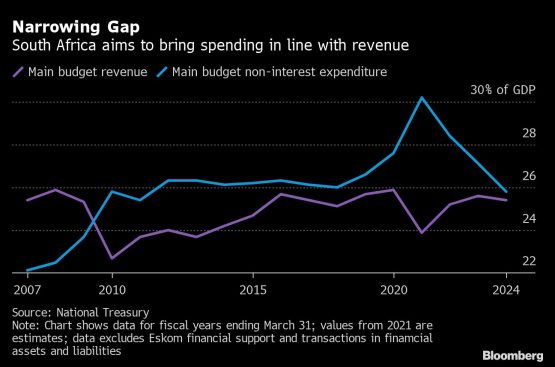 Africa’s most-industrialised economy is estimated to post a primary surplus in 2024-25, a year earlier than projected in October, according to the Budget Review.

Of 20 economists in a Bloomberg survey last week, 13 said the Treasury will not be able to achieve its goal of main budget revenue exceeding non-interest spending by 2025-26. A primary budget surplus is the government’s most critical fiscal anchor rather than a spending ceiling, said Edgar Sishi, acting head of the budget office. Reducing the rate should have a positive impact on wages and employment, while promoting additional investment, the Treasury said. It also scrapped previously announced plans to raise 40 billion in taxes over four years.