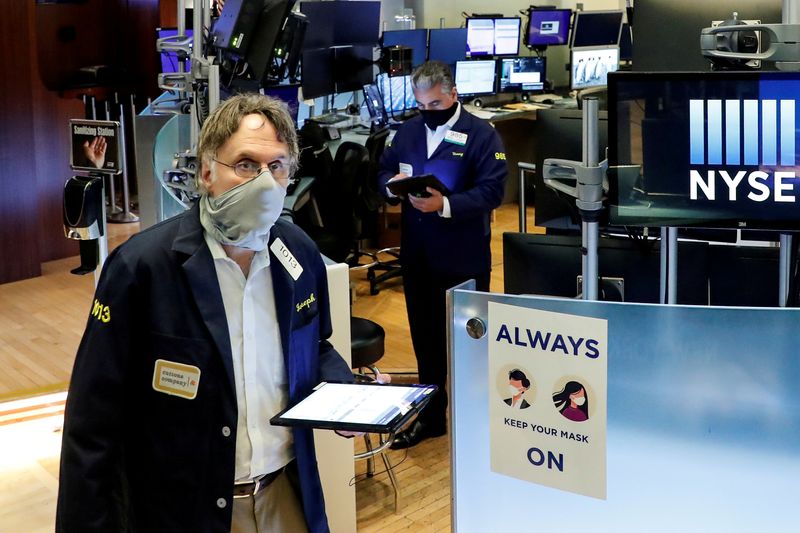 NEW YORK (Reuters) – U.S. stocks slid on Thursday after U.S. President Joe Biden said China was poised to “eat our lunch,” a warning that raised concerns for a market hovering near record highs on hopes of more stimulus, strong earnings and an improving outlook for the pandemic.

A 1.7% rise in PayPal Holdings Inc (NASDAQ:) helped Information Technology gain 0.5%, the only sector on the and Nasdaq to rise, with all others declining.

Biden told a group of U.S. senators in a meeting to discuss the need to upgrade U.S. infrastructure that the United States must raise its game in the face of the challenge from China.

The warning about China and Democrat plans to include raising the minimum wage to $15 in a $1.9 trillion stimulus package showed headwinds could be on the rise, said Ed Moya, senior market analyst at OANDA in New York.

“Markets are starting to get a little bit nervous over the relations between the West and China,” Moya said.

Biden’s first call late Wednesday with China’s President Xi Jinping “resurfaced all of the difficulties that we’re going to face this year in addition to the pandemic,” he said.

In addition, the Democrats are not falling in line as far as where they stand on the minimum wage, he said. “This is dragging out stimulus talks.”

Mastercard (NYSE:) rose after the credit-card company said it was planning to offer support for some cryptocurrencies on its network this year, joining a string of big-ticket firms that have pledged similar support.

Bank of New York Mellon (NYSE:) rose about 1.0% after saying it had formed a new unit to help clients hold, transfer and issue digital assets, sending up over 8% to an all-time high of $48,481.

The number of Americans filing new applications for unemployment benefits were 793,000 last week, compared to 812,000 in the prior week, but they are well below the record 6.867 million reported last March when the pandemic hit the United States.

Analysts now expect fourth-quarter earnings for S&P 500 firms to grow 3%, versus forecast of a 10.3% drop at the beginning of January, per Refinitiv data.

“There is room for the market to take a breather but usually there is some sort of catalyst that gets that going,” said Tom Martin, senior portfolio manager at Globalt Investments in Atlanta.

The tech sector and semiconductors hit record highs, while economy-linked energy and industrials took a back seat after being in the spotlight this year.

U.S.-listed shares of cannabis companies including Tilray (NASDAQ:) and Aphria (NASDAQ:) reversed premarket gains to drop 42% and 20% after the sector caught the attention of Reddit-inspired retail investors this week.

Walt Disney (NYSE:) Co was nearly flat ahead of its results after market close.

Pinterest (NYSE:) Inc rose 7.1% after a report said Microsoft Corp (NASDAQ:) approached the image-sharing company in recent months about a potential buyout. The negotiations were, however, currently not active, according to the report.

Declining issues outnumbered advancing ones on the NYSE by a 1.46-to-1 ratio; on Nasdaq, a 1.61-to-1 ratio favored decliners.