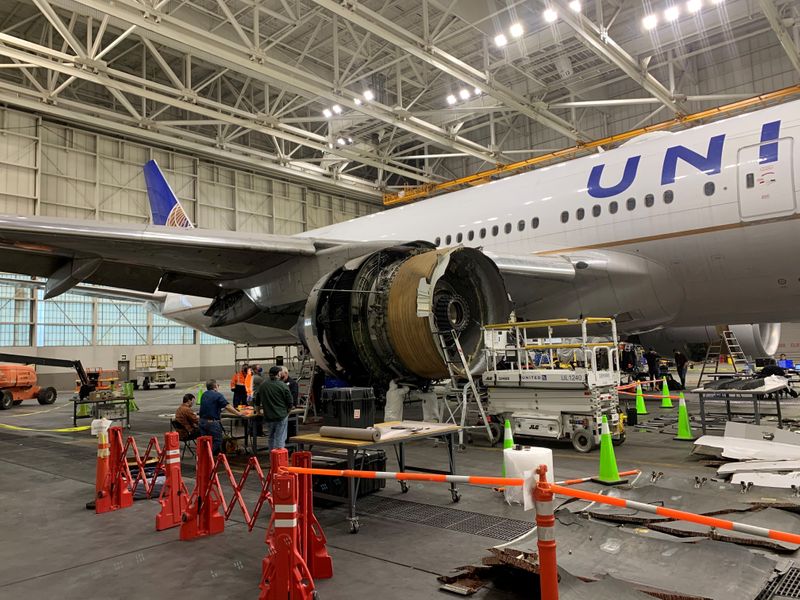 WASHINGTON (Reuters) – A United Airlines plane with a Pratt & Whitney engine that failed on Saturday had flown fewer than half the flights allowed by U.S. regulators between fan blade inspections, two sources with knowledge of the matter said.

The Boeing (NYSE:) Co 777 plane had flown nearly 3,000 cycles, equivalent to one take-off and landing, which compares to the checks every 6,500 cycles mandated after a separate United engine incident in 2018, said the sources.

They sought anonymity as they were not authorized to speak publicly. United declined to comment.

Pratt, the maker of the PW4000 engines, advised airlines on Monday to step up checks to every 1,000 cycles, in a bulletin seen by Reuters. It did not immediately respond to a request for comment.

On Tuesday, the U.S. Federal Aviation Administration said it was ordering immediate inspections of 777 planes with PW4000 engines before they could return to flight, going further than Pratt.

The engines are used on 128 older versions of the plane, accounting for less than 10% of the more than 1,600 777s delivered and only a handful of airlines in the United States, South Korea and Japan were operating them recently.

Japan and South Korea have also grounded the planes for fan blade checks.

On Monday, the FAA acknowledged that after a Japan Airlines (JAL) PW4000 engine incident in December it had been considering stepping up blade inspections that use thermal acoustic imaging to find signs of metal fatigue.

A risk-assessment meeting was held last week to discuss the issue before the United engine failed on Saturday, one of the sources said, confirming an earlier report by CNN. No decision had been imminent ahead of the United incident, the source added.

A spokeswoman for Pratt, owned by Raytheon Technologies (NYSE:), said on Wednesday that fan blades would need to be shipped to its repair station in East Hartford, Connecticut, for the latest inspections, including those from Japan and South Korea.

Each engine has 22 blades that must be removed individually and, and each will take eight hours to inspect, FAA Administrator Steve Dickson told Bloomberg TV on Wednesday.

That is the equivalent of 352 hours of work per plane, as each 777 has two engines. Boeing said 69 of the planes were in active service before Saturday’s incident, while 59 had been grounded amid low demand during the pandemic.

Pratt did not respond to questions about how many engines it could inspect per month. United has not commented on how long it expects the inspections to take, while JAL and ANA Holdings said the timing was unclear.