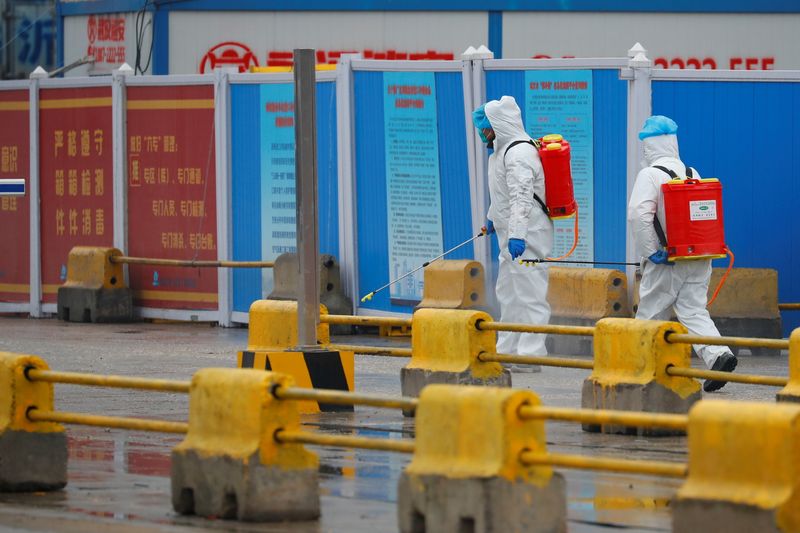 © Reuters. Workers in PPE spray the ground with diinfectant in Baishazhou market during a visit of World Health Organization (WHO) team tasked with investigating the origins of the coronavirus (COVID-19) pandemic, in Wuhan

WUHAN, China (Reuters) – A World Health Organization-led team of experts investigating the origins of COVID-19 visited Huanan market on Sunday, the wholesale seafood centre in the central Chinese city of Wuhan where the new coronavirus was initially detected.

The team of experts arrived at Huanan on Sunday afternoon amid a heavy security presence, with additional barricades set up outside a high blue fence surrounding the market.

The WHO experts did not respond to questions thrown at them by reporters gathered at the entrance as their convoy drove into the market. The barricades came down as soon as they had entered.

Public access to the market has been severely restricted since it was shut at the beginning of last year. Before its closure, it was a bustling market comprising hundreds of stalls divided into sections for meat, seafood and vegetables.

Some Chinese diplomats and state media have said they believe the market is not the origin, and have thrown support behind theories that the virus potentially originated in another country.

On Dec. 31, 2019, after four cases of a mystery pneumonia were linked to the market, it was shuttered overnight. By the end of January, Wuhan had gone into a 76-day lockdown.

Experts say the Huanan market still plays a role in tracing the origins of the virus, since the first cluster of cases was identified there.

Following a two-week quarantine in the city that ended on Thursday, the WHO team is expected to visit laboratories, markets and hospitals in Wuhan.

No exact itinerary has not been announced, but the WHO has said the team plans to visit Huanan market and the Wuhan Institute of Virology.

The WHO-led probe in Wuhan has been plagued by delays, concern over access and bickering between China and the United States, which accused China of hiding the extent of the initial outbreak and criticised the terms of the visit, under which Chinese experts conducted the first phase of research.

The team had been set to arrive in Wuhan earlier in January, and China’s delay of their visit drew rare public criticism from the head of the WHO, which former U.S. President Donald Trump accused of being “China-centric”.